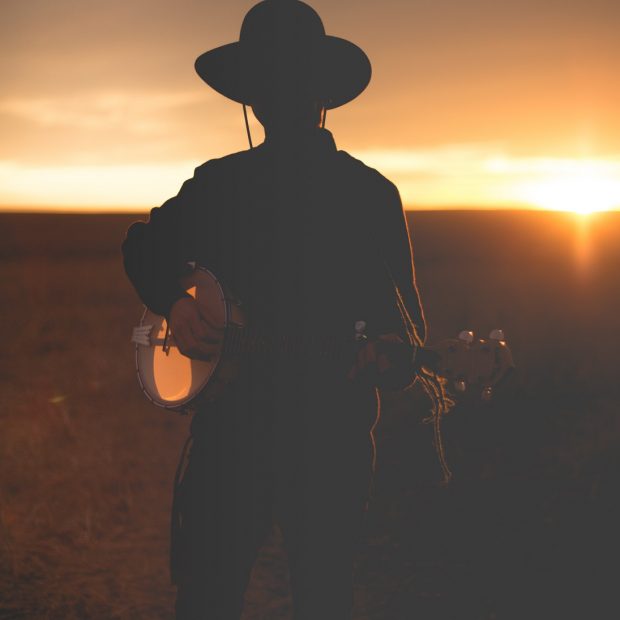 My relationship with, and understanding of the power of music has followed, in the last few years, a trend toward the spiritual. This little awakening began when I discovered the song How it Ends, by a little-known indie folk/gypsy-cabaret band called DeVotchKa. I’d seen, perhaps on Youtube, an advertisement for an old Xbox 360 game called Gears of War II, which played the song over a despondent montage of images—men clad in heavy, futuristic armor shooting and hacking their way through hordes of enemies, their faces streaked with horror and regret.

It remains one of the most powerful advertisements for any piece of art I’ve ever seen, and the song played a big part in its emotional reverberation. I looked up the lyrics, found the tune’s name, and listened to it in full—to the somber, bobbing keyboards that precede the introductory swell of an orchestra, to the haunting, mournful croons of frontman Nick Urata, and, finally, to the yearning violins that carry the track to its close.

I remember, very vividly, the conflicting feelings of peace and despair that the track evoked, the warmth and goosebumps that pricked at my entire body.

I’d never had such a transcendent musical experience, which is why, for the next few weeks, I couldn’t stop listening to it. It even prompted me, one night, to write a poem in response to the song’s impact:

Distant cries of a foreign city,

Of tumult and reverberation

Weeping aloud at the gates of heaven,

Painfully singing a dream of bliss,

High above the ground

Made of fertile silver ash.

And what complex simplicity,

Memory more than a fleeting instant.

Life may go on,

Right at this very moment.

In the intervening years, I’ve found myself drawn even closer to the experience that intense music can bring, and more specifically, to the way in which it can not only distract from, but minimize, everyday sufferings. Had a bad day at work? Listen to a powerful song and accept its sweet release. Had an ugly fight with a friend or family member? Put on a pair of headphones and float away with the tides of sound. This works for harder-to-classify feelings as well, which I’m prone to—worried about the inevitability of death and the agonies of the human condition? Add that tune to your “Emotional” playlist on Spotify and let the magic happen.

Jokes aside, How it Ends has helped me appreciate the power of music and the importance of art that is unafraid to delve into the realities and confusions of existence.

It has led me, too, to discover similarly mesmerizing music across a span of genres, whether folk, punk, electronic, alternative and classic rock, or even hip-hop and rap. One of the more truly luminous songs I’ve become attached to recently is Splendor, by French electronic musical project M83, which grapples with themes of fleeting childhood innocence and the inevitability of aging over a backdrop of synthesizers, choral melodies, and an explosive, clap-filled finish that, every time I listen, transports me to a space of awe and almost religious reverence. Bon Iver’s Re: Stacks comes to mind as well, and, with its understated acoustic guitar twangs and swirling falsetto, proves that music doesn’t have to be grandiose to have a grand emotional impact.

This is, more simply, to say that music can be healing.

An old trope, of course, but it’s proven truer than I could have possibly imagined. Things have arisen to a point where it’s not even a matter of how good music makes me feel—it’s a matter of what it can teach, and how it says what it wishes to convey. The more music I listen to, then, and the more of it I discover, the more I’ll be able to see parallels between my own life, with all of its joys and troubles, and the lives of others. It’s an exercise in connection. In universal empathy.

I’m looking forward to seeing what new music I’ll discover in the next few years. Thankfully, there doesn’t seem to be a shortage of it.

[Home » Blog » The Power Of Music And Transcendence]

The Power Of Music And Transcendence